Let me preface such a bold statement by saying that if you’ve never seen a tropical rain forest or waterfalls then definitely drive to Hana. It is beautiful. Winding roads and one-way bridges. Black basalt cliffs that drop off into the blue ocean. Hills so heavy with moisture that water seeps out of the rock, trickles down the sides of the slopes, and glistens off delicate maidenhair ferns and vibrant green moss. Air perfumed with the sweet smell of wild ginger flowers mixed with a ripe sour odor of tropical fruit fermenting on the ground under the trees.

But don’t drive up there expecting the dense forest to part like a botanical curtain, revealing a secluded waterfall with white aerated water cascading into a glassy turquoise pool. You will most definitely not be able to convince your companion to strip down and make passionate love to you, the cool water falling on your backs from the cliffs above. There are numerous waterfalls and waterholes, but you will share each with a dozen or so tourists dipping their white hairy legs in ash green water that seems to have taken on an oily sheen from all the diluted sunblock and bug spray in it.

Hana is gorgeous, no argument there. But if you’ve seen a tropical rainforest before and only have a few days in Maui, I would recommend spending the 6+ hours it would take you to drive to and from Hana, eating and relaxing in Makena instead.

Grab a towel and spend part of that time lying out on the warm white sand of Big Beach. It’s the largest non-developed white sand beach on the island and it is phenomenal. A pretty sudden drop about 30 feet offshore results in consistent 8-12 foot waves—hours of fun for those who enjoy boogie boarding or body surfing, and a relaxing soundtrack for nappers and sunbathers (not that I’m promoting tanning! It’s bad, very bad!) 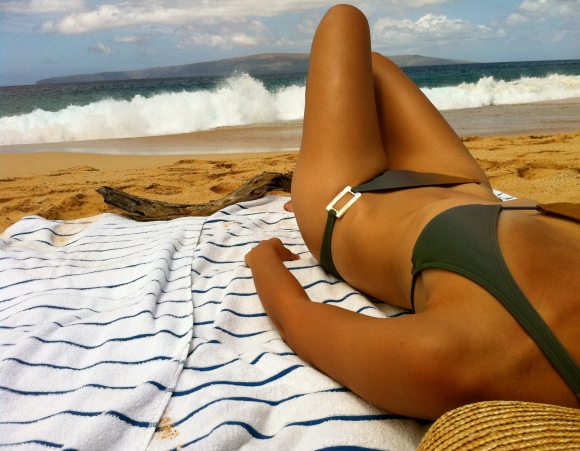 If you’re up for a little adventure and a bit of a show, climb the rocky cliff on the far right. On the other side of the lava outcropping lies the clothing optional Little Beach. The combination of wind, waves, surfboards and nudity makes for a show that could rival Puppetry of the Penis (imagine penis origami… or maybe don’t). Nude sunbathing isn’t officially allowed in Hawaii, so if you want to return home sans tan lines this is the place. Alternatively, if you are simply curious what a naked man hunched down riding a wave looks like… Ta-da!

After a few hours of swimming (and showing), you’re apt to be a bit peckish. Luckily there are two superb dining options close by that serve my favorite type of food—meat grilled on the side of a road.

Immediately across the road from the entrance to the parking lot for Big Beach is a stall selling Ahi and Mahi Mahi sandwiches. The chef/owner of this gritty food operation is a character straight out of an Anthony Bourdain novel—bare-chested, tattooed, sporting a beard and ponytail. He has an affinity for talking inches from your face, an experience enhanced by the fact that he’s missing his right front tooth.

His 13 years in the food industry were evidenced when he cut a perfect one cm. onion ring by cupping the onion in his left hand and smoothly guiding an 8inch blade straight through the bulb with his right hand. He whipped out a disposable latex glove for handling the fish, showing that—contrary to what his personal appearance might suggest—cleanliness is a high priority.

We caught whiffs of caramelizing pineapple as we sat on a twisted log waiting for the fish to cook and were regaled with the musings of a man who clearly spends a lot of time in his own head. He told us about the night he kicked everyone off the line in a restaurant where he worked and finished the busy dinner service with only a dishwasher by his side. He bragged about the various job interviews where he threatened to punch his prospective boss. But we were repeatedly assured that he never kicks a man once he’s down—he always waits for the opponent to stand up before laying into him again. With the passion of a guidance counselor instructing a wayward teenager he cautioned us to keep our backs to a wall whenever we found ourselves in the next inevitable bar brawl.

Our host bragged that he would impersonate a crazy person if ever faced with a prison sentence, excitedly assuring us that it would earn him a little vacation on the funny farm and secure him an early release. I don’t think he’ll have to try too hard to convince anyone. Thankfully his fish sandwich is determined to outshine his intense personality.

Marinated in a secret sauce (the chef is willing to part with the recipe for a measly $10,000) and cooked to perfection over smoldering wood, the fish is sandwiched between a split bun, shredded lettuce, tomato, sweet onion and a thin slice of grilled pineapple. There are no condiments on the sandwich. The juices from the fish, pineapple and tomato provide all the sauce you need. It is fresh, smoky, flavorful and large.

If grilled fish or brawling tips aren’t for you, then stop at the Big Beach BBQ wagon, about a hundred meters or so back up the road towards Wailea. They have fish as well, but the real star is their succulent kalua pork, slow cooked the night before by the owner & operator, it’s heaped over shredded cabbage on warm tortillas or soft purple taro buns.

The Hawaiian sausage made of pork and pineapple that they offer was another favorite of mine. I happen to like thicker sausage casings that have a bit more resistance and rewarding spring to them. These definitely qualify. Split open, grilled on the spot and placed in a hotdog bun and topped with a bit of crunchy cabbage—these sausages are delectable.

With a full belly you can either return to Big Beach for a snooze in the sun, or head back to your hotel for a poolside piña colada… or perhaps to the privacy of your hotel room to practice some puppetry of your own. Now, doesn’t that sound better than spending six hours in a car, and unwittingly rubbing up against total strangers in a murky swimming hole?