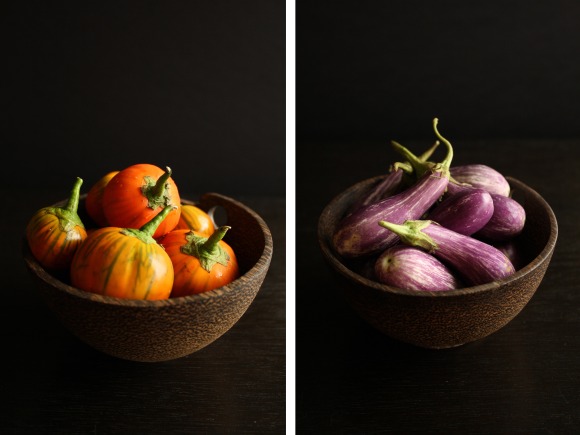 We’ve all tasted poorly prepared eggplant—a gray, bitter mushy blob so unpleasant that it left a scar on our food subconscious. I’ve sent back eggplant dishes at otherwise fantastic restaurants because their bitter eggplant brought me the same pleasure I imagine sucking on a metal popsicle would. True, it can be a challenging vegetable to work with, but when cooked correctly, eggplant can also be a thing of beauty.

There is a popular dish in Japan called nasu no dengaku: essentially, broiled eggplants with a miso, sake and sugar glaze. While delicious, I find the purely traditional form to be a little too sweet for my tastes. Even so, I love how the skin gets lightly charred and smoky while the flesh turns creamy under the intense broiler heat.

My version of nasu no dengaku came together after a dinner at Kaz Sushi Bistro in downtown DC. Chef Kaz Okochi has the most amazing spicy broiled New Zealand mussels on his menu. The sauce on this dish is incredible. In fact, I loved it so much that I went home and tried to replicate the flavors. Now I’m sure Chef Okochi’s secret is far more complex than combining three ingredients in a bowl, but to be honest my version tastes SPOT ON. Best of all you can easily whip up the sauce in under a minute & it partners beautifully not only with mussels* (see Cook’s Note), but with eggplant and a variety of fish as well.

Miso, a fermented soybean paste, imparts a deep salty flavor. The mayonnaise makes the sauce luscious, and keeps whatever you spread it on moist. As for the Sriracha… do you really need a reason to invite the ever-popular “Rooster” hot sauce to the party?

I prefer to use Chinese or Japanese eggplants because they lack the bitterness of other varieties. But if you want to use other types try curing them first.

1. Cut the eggplant in half lengthwise.
2. Score the flesh. (Tiny cuts in a crisscross pattern)
3. Sprinkle generously with salt and allow the eggplant to sit for 45 minutes to an hour.
4. Rinse and dry the eggplant halves before cooking

Or you can use baby eggplants which typically haven’t had a chance to develop that infamous acrid flavor. Last Sunday I picked up some gorgeous French and Turkish baby eggplants at the Dupont farmers market (I recommend the French ones). I split them in half lengthwise, scored the flesh, spread the miso sauce over them & popped them in the toaster oven. Twenty minutes later I pulled out a visually stunning and deliciously earthy autumnal side dish.

• Mix the mayonnaise, miso and Sriracha in a bowl (spice lovers, there’s nothing wrong with adding a little more Sriracha).

• Cut the eggplants in half lengthwise and score the flesh, taking care not to cut through to the skin. Drizzle with a little oil.

• Lay the eggplants, cut side up, on a lightly oiled sheet pan

• The total length of cooking time will vary depending on the size of the eggplants you are using but begin by placing them in the oven for 20 minutes. Keep a close eye on the sauce; you don’t want it to burn. If it starts to get too much color cover the sheet pan loosely with foil.

• Check for doneness by squeezing the eggplant. When it’s ready it’ll be soft and give easily.

• Just before removing from the oven blast the eggplant under the broiler for 30 seconds.

• Top with sliced chives or scallions and enjoy immediately

Cook’s note: For the mussel version of this dish scrub and debeard the mussels. Heat a little stock or sake on the stove in a wide skillet. Once the liquid comes to a boil add the mussels and cover tightly. The mussels will open in 30 seconds–1 minute. Remove from the heat and pull the shells apart. Spread the sauce on top of the side containing the mussel. Place the mussels on a sheet pan and under a broiler set to high. Blast for 30 seconds-1 minute. Sprinkle with scallion slices and serve.

Summer in DC has all the components of a passionate but ultimately doomed relationship.  Think about it… it starts suddenly, with very little warm up & quickly overwhelms you with its intense heat. Instead of working you spend hours staring blankly at your computer screen, reliving in your mind the wild moments from the night before, and fantasizing about what the weekend will bring. You play hooky from work to drink sangrias on a patio, picnic in a park, or drive out to the countryside for a long weekend getaway… and maybe for a moment you believe it will go on forever.

But you know how this story goes. Things cool off faster than you were expecting. As the heat dissipates the flirty dresses, lacy under-things & satin camisoles are all banished to the back of the closet. Come November, you’ll be stressing year-end deadlines in an oversized sweater designed to hide the five extra pounds you’ve packed on since summer’s abrupt end.

But just as no relationship worth remembering ends without a final steamy tryst, one day before the first frost you will inevitably wake up to a day that feels just as hot as it did in mid-July. It’ll only last a few hours, but it’s enough to make you momentarily slip back into the dreamy haze.

This is a recipe for that day.

Topped with savory beef & drizzled with a spicy lime and fish sauce vinaigrette, this dish is the opposite of a dull everyday lunch salad. Purple perilla brings an herbaceous complexity, while mint further brightens the crisp lettuce, slippery noodles, peppery radishes & sweet onions. You can easily throw this salad together in 15 minutes, leaving plenty of time to enjoy the final warm moments of summer.

So kick off your shoes, pour yourself a tall glass of icy plum wine, close your eyes, and begin the pleasurable task of deciding which summer memories are worthy of a permanent spot on that racy highlight reel of yours. 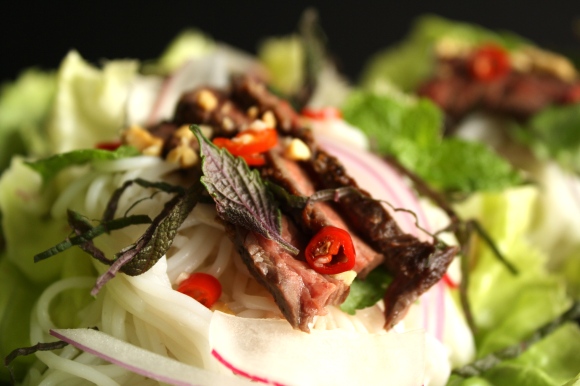 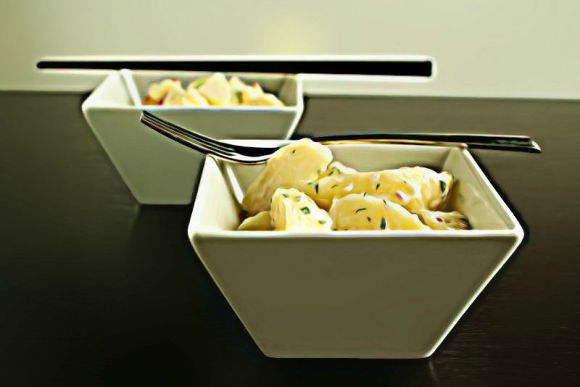 Two weeks into my voluntary indentured servitude at the restaurant, Chef handed me a stack of A4 papers stapled on the left corner… a take home exam. It asked for detailed descriptions on how to make basic sauces & classics such as duck confit & rice pilaf. Then there were sections for mini dissertations on the key points of big pot blanching and the right way to cook & cool root vegetables. The final two pages housed a list of ingredients & French cooking terms for memorization (think—aiguillette, cuisson, cubebe) and the names of prominent chefs & their flagship restaurants. It was a given that the corresponding quiz for the final two pages would be given at the moment one least expected it.

My innocuous super power (everyone has one) is the ability to memorize just about anything. Thus I kinda’ kicked butt on the second part of the exam. A week later, convinced it was a fluke, Chef gave me the test a second time. I missed one. (I still have nightmares in which I am hunched over one of the stainless steel countertops staring blankly at the word SOUBISE).

Needless to say, in all the places where memorization played no part I stunk it up. Embarrassing, but I learned a lot. Not the least of which was to master the fundamentals and not be afraid to ask or research anything I didn’t know rather than absentmindedly going through the motions.

Below is a simple recipe that utilizes two of these fundamentals—cooking potatoes and making mayonnaise. Prior to working in the restaurant I always used store bought mayo. Now I make my own, often “fancying” it up with garlic, herbs or other condiments. And occasionally I’ll use the Japanese mayonnaise Kewpie because contrary to what other blogs may say there is no acceptable homemade version.

The process of whipping up a mayonnaise is simpler than what you’re probably conjuring up in your head, and it’s worth the effort.

As for the potatoes, the technique below yields potatoes with uniform texture that hold their shape when you toss them with the other ingredients. I guarantee the next time you serve a potato salad, guests won’t be wondering if the main component is last nights’ leftover mashed potatoes.

My husband blames my Canadian blood for my unhealthy obsession with mayonnaise. Maybe he’s right. Love it or hate it, mastering emulsification (blending two ingredients—such as oil & vinegar—not normally found together) will aid you greatly when you advance to the realm of “fancier” sauces. And hell, at the very least you’ll be prepared should someone ever decide to give you a culinary aptitude test.

First the mayonnaise…
• Twist and form a ring out of a dishtowel. Place the towel on the counter and a large mixing bowl over it. The towel will securely hold the bowl allowing you to whisk the mayonnaise with one hand while drizzling in the oil with the other.

• Drop the egg yolk into the bowl. Add a pinch of salt, whisk. Drizzle the oil in slowly, whisking quickly. Chef liked to point out that all the action is in the wrist. Your elbow shouldn’t be moving.

• Once you have the beginnings of a sturdy emulsion, add the vinegar & lemon juice. Continue whisking, adding oil as you go along. I like to add a ¼ tsp. of sugar because I think it rounds out the flavor, you can add it or leave it out.

• If you want a firmer mayonnaise keep adding oil until you reach the consistency that you want. The more oil you add the thicker your mayonnaise will be. 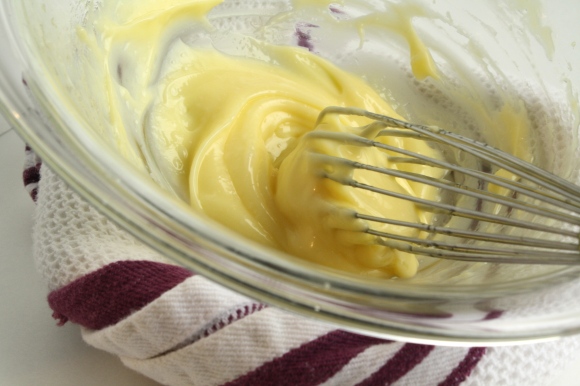 On to the potatoes…
• If you’re making the French inspired potato salad, peel the potatoes & cut them into wedges (I usually get eight out of one potato). Place the potatoes in a small pot. Cover with cold water. Salt generously.

• If you’re making the Japanese version, peel and cut the potatoes into quarters and then slice across, into ½ inch thick triangles. Place potatoes in a small pot. Cover with cold water. Salt generously.

• Bring the potatoes to a boil over high heat. Once they come to an aggressive boil turn the heat down to medium. Continue cooking until you can insert a skewer or fork easily into the flesh.

• Remove from the heat. Place the potatoes under gently running cold water. Let them cool this way for a few minutes.

• Drain and dry on paper towels.

For the French inspired potato salad…
• In a large bowl combine the potato wedges, the minced shallot, mayonnaise (exact amount depends on your preference) and minced tarragon. Taste and season with salt and a few turns of the pepper mill. 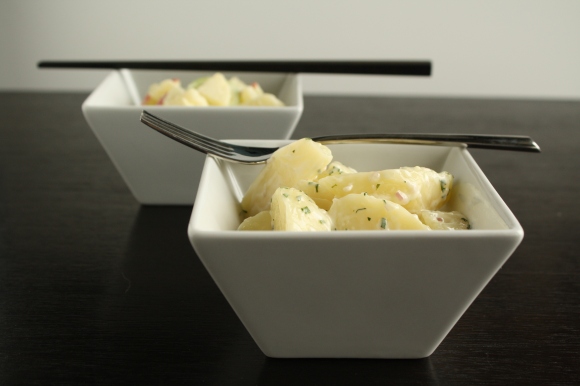 For the Japanese potato salad…
• In a large bowl combine the potato slices, Kewpie mayonnaise, cucumber and apple slices. Season with salt and white pepper.