Ever wondered why some restaurant meals taste so much better than what you’re whipping up at home? How they manipulate their steak so that the flesh reacts like a sponge when squeezed between your teeth, savory juices oozing as you bite down? Or stared suspiciously at a creamy risotto, its rounded grains relaxingly spread out on the plate, glistening as they mock your home cooked version that barely shudders even when violently shaken? Perplexed why those golden nests of pasta twirled in silky sauce look nothing like your go-to lady slayer, spaghetti “sticky strands with watery red goop” Bolognese?

Many a frustrated home cook has justified their shortcomings by laying blame on the evil kitchen duo, butter and salt.

Well they would be right… kind of. What this flippant response ignores is mastery of proper cooking technique. Yes, professional cooks use a great deal of salt, but they also know when to add it. They know that to build flavor, you have to learn to cook with salt rather than showering it on at the end, expecting that it will magically fix the failures in your dish.

Sure restaurant cooks use butter (in a French kitchen they use A LOT of butter). However, they also know the difference between using solid, clarified and beurre monte. Salted versus unsalted. Most importantly, they know that there is no acceptable substitute for top quality stuff.

But it’s not just butter and salt. A good cook knows when to use lime instead of lemon juice, champagne vinegar instead of sherry vinegar. The subtle difference between virgin and extra virgin olive oil. What will happen if they use canola rather than grapeseed oil. And how the flavor will be affected if they add honey instead of crystallized sugar.

Knowledge and technique are the so-called tricks to decadent food.

I promised Chef I would never divulge any secrets I learned while apprenticing under him, but I think I can get away with spilling one tiny one… if you want to highlight an ingredients’ natural sweetness without bringing the whole dish into the realm of dessert try adding fruit instead of sugar.

In the recipe below I’ve used an apple to add a subtle sweetness to the pâté that could never be accomplished with honey or any type of sugar. As for the butter that is called for, toss out all the fake “healthy” fat substitutes in your fridge, and go out and get the real thing (I use Kerrygold, Pure Irish Butter).

Wanna cook like a chef? Start with the right ingredients, and take the time to learn how to use them. 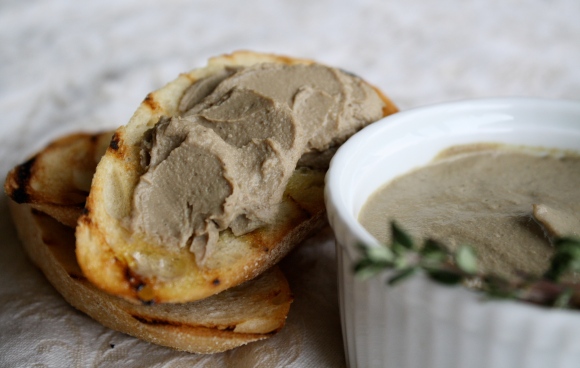